Whether you’re following tradition to a tee and having an authentic Asian-style wedding or simply looking for small ways to honor your heritage, you have choices — many choices — for what to wear. Here are wedding-day options that will reflect your Chinese, Japanese, or Korean background. You might go completely traditional, opt for “Americanized” dress with Asian style — or both! Read on for ideas.

TRADITIONAL TAKES
Be sure to talk to your parents or grandparents (and/or your fiance’s) about traditional wedding clothes — they’re bound to have some great ideas or even family heirlooms that they’ve just been waiting for you two to ask about! You can also buy or rent wedding wear from local stores or banquet halls. Check in Chinatown if you live in a large city, or call Asian-American chambers of commerce or cultural associations for ideas of where to look. 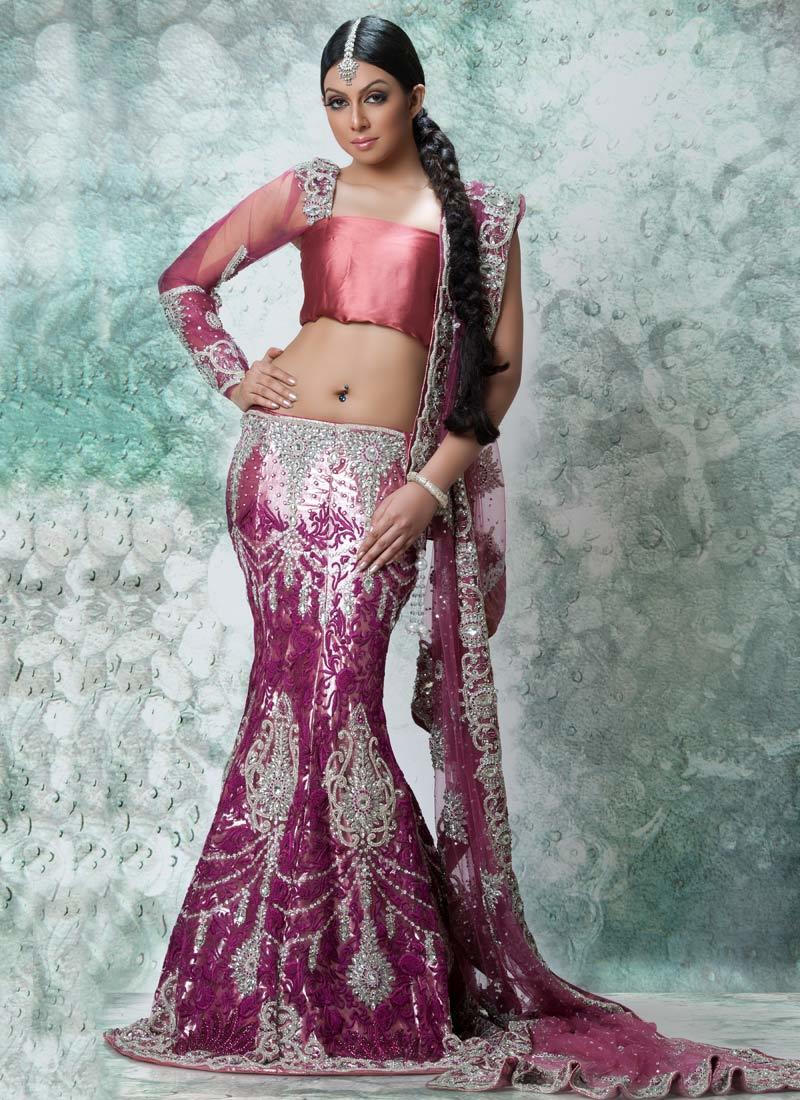 CHINESE
Wedding styles in China vary depending on where the bride lives. Northerners generally wear form-fitting dresses with intricate designs called cheong sams. In the South, brides don a long jacket over a long, embroidered skirt. Brides customarily change many times (to show the wealth of the family).

“The traditional gown is red, the color of luck, and very ornate,” explains Shu Shu Costa, author of Wild Geese and Tea: An Asian-American Wedding Planner “At many of the Chinese-American weddings I’ve been to, the bride will change from Western wedding dress to Chinese wedding dress to various party dresses. She is also supposed to wear all the jewelry she owns — a public display of her ‘dowry’.” The bride also wears a “phoenix crown” on her head, from which a red-silk veil hangs to cover her face, and she carries a folding fan.

The groom traditionally wears a black-silk coat over a dark-blue, embroidered-dragon robe; on his head, he wears a black hat with red tassels.

JAPANESE
Japanese brides also change several times on their wedding day, in a process called ironaoshi. The formal wedding kimono, or shiromuku, is made of white silk, symbolizing happiness and a new beginning, and it’s multi-layered — the more “upper-class” the bride is, the more layers she wears (Crown Princess Masako wore 12 layers; “commoners” would wear three!).

“At the reception, the Japanese bride (and sometimes the groom) changes clothes, from the white wedding kimono to a more colorful one, and then again to a kimono reserved for unmarried women — the last time she will be able to wear this gown,” says Costa. “More than signifying wealth, these changes reflect the transition the bride makes from young girl to married adult.”

The groom traditionally wears a black silk kimono with his family crest, or mon, emblazoned on it in five different places, with a striped, pleated skirt called a hakama and a haori coat that also has the crests on it underneath his robe.

KOREAN
Korean brides wear either a simple lime-green wonsam or a more intricate hwarrot (also known as the “flower robe”) over the traditional wedding dress, or hanbok. The wonsam and hwarrot are both embroidered with flowers and butterflies, with long, draping sleeves banded with red (for heaven), indigo (for earth), and yellow (for man). The bride’s hands are covered in a band of white — a symbol of respect. She also wears a tied-in-the-back red sash with an embroidered Chinese phoenix, the traditional symbol of marriage. She usually wears a multicolored, gem-studded black cap on her head and white socks with embroidered shoes on her feet.

Korean grooms wear a faruotsu, made of dark-green damask with symbols woven in gold. His sleeves are also banded in red and yellow, ending in white, and he also wears a red sash around his waist, as a tall black cap and boots.

MODERN ASIAN STYLE
You can modernize your wedding-day look while still reflecting your Asian heritage: Select gowns by today’s bridal designers that include some of the details you’d find in traditional Asian costumes.

CHINESE-AMERICAN Concentrate on brilliant reds and the changing process to give your modern look a traditional feel. Designer Mika Inatome echoes Chinese traditions in one of her latest designs. The dress has a detachable skirt which “changes” the whole look of the gown. Another Mika Inatome design mirrors Asian costumes with its fitted bodice, high neck, and cap, which combine Eastern and Western styling beautifully. Another option: wear a red dress yourself or put your bridesmaids in red — Watters and Watters makes a dress in just the right shade.

JAPANESE-AMERICAN Think crisp white, simple and elegant. Check out dresses by Yumi Katsura, a Japanese designer, or look for designs that mirror the shapes and drapes of kimonos but are completely modern.

KOREAN-AMERICAN Think about vivid jewel tones — like the traditional colors red, indigo, and yellow — along with white. Look for white gloves delicately embroidered with these hues (remember, it’s a sign of respect to cover your hands) — or have a pair made for you. Think about wearing a red sash with floral embroidery around your shoulders or waist to add a cultural complement to a Western-style dress.

Copyright © 2018, Wedding Dresses Guide | Some rights reserved | All trademarks, logos and copyrights are the property of their respective owners.